Muhtiman on topic Multichoice -DSTV
.....the problem with the eventual upgrade but down scale to get the new Dora Explora that they do not mention in all their ads and promotions about the extra costs of installing a "smart" LNB because the Explora does not use a dual or quad LNB used on the dual HD recording PVR systems.....fortunately the new LNB don't cost an arm and leg only R500 however an installer will rip you off in having the LNB installed... the upside of this new LNB is that it can also be fed dual and quad connections making it easier to have your older decoder connect to it in tandem with the explora making the extraview (ability for viewing separate channels) on 2nd TV possible as having 2 Dora's is expensive and not necessary as one could use a simple non HD decoder or 2nd hand one to keep costs down....

.....the smart multiport LNB is still available but not with new DSTV installation packages who now use a Smart dual connection to limit the re use of older non dora decoders and also a FTA box connection to the universal port.
My idea of "help from above" is a sniper on the roof
and a higher power is a hell fire missile armed drone.
The following user(s) said Thank You: Mac

Less More
1 month 3 weeks ago #844442 by Muhtiman
Muhtiman on topic Media Release: GallopTV
Get 100 channels on your DStv decoder for free — without a subscription
Staff Writer21 June 2022

An experiment by MyBroadband showed that you could add more than 100 channels to a DStv decoder for free by changing a few settings.

The channels are broadcast free from the satellite DStv uses, Intelsat 20.

Viewing these channels requires a satellite decoder that supports DVB-S and DVB-S2 modulation and MPEG4. These are available on modern DStv decoders.

You also need a dish antenna and LNB pointed at the satellite, which should be ready if you have an active DStv connection or had one in the past.

Because this is not a DStv service, you should be able to view these channels without an active subscription.

It is ideal for those who cancelled their DStv subscriptions but still have the hardware.

We followed the information from different guides and were able to add many new channels, but this may differ for other users, depending on your signal strength and setup.

Setting up additional satellite networks differ depending on the decoder model, but it was simple to do on the Model 4S we used.

After pressing the blue DStv button, we could scroll to satellite settings and click on additional networks, which allowed us to access five network settings.

Most of the guides we found cautioned against changing anything on network 1, as that is often being used by DStv itself, even though it was disabled on our decoder.

We set up networks 2 to 5 based on information we found online. We skipped over configurations that showed no signal strength and scanned those that showed promise.

The following settings worked on our setup.

The decoder must scan these configurations for new channels. After the scan, you can access them by changing the options to “All Channels” instead of “My Channels” in the browsing menu.

While most of the free channels were religious, there were several other types too.

We could see all the Openview HD channels but could not tune into any, as that would require the decryption key from an Openview decoder.

We also found stations played in specific retailer chains such as PEP, Game, and Clicks.

We could only find one sports channel called Sports Connect.

It featured some interesting shows, such as a chainsaw competition and the Asian Le Mans.

We also found a kids’ channel and a crime story channel.

The free channels are not the best entertainment available, but they are gratis — a difficult price to beat.

......from what I gather only possible on non Dora(Explora) decoders ie those that do not need smart LNB unicable connections...

..its cold as f@ck out up on the roof so not gonna go up to experiment but if this option can get Gallop TV on a Dora it would be ideal....

The first frequency mentioned - 11514 V 28750 has many programs - one being Gallop Tv, which is currently beaming as Free to Air (FTA).

The SABC channels etc are encrypted (in red)

I don't think there are any other sports frequencies - thou v occasionally 12606 and 12615 had some live sport content.

It should be noted, some of these frequencies need a bigger dish than regular DSTV
Last edit: 1 month 3 weeks ago by lefty.

Less More
1 month 21 hours ago #846327 by Sylvester
Sylvester on topic Media Release: GallopTV
I have pretty much stopped watching Channel 240 unless i have a bet or a horse that i wanna see run.

I however enjoy Gallop coverage. whether local or Overseas coverage just a way better product.

Cant wait for Western Cape to be on the Gallop TV channel.

Less More
4 weeks 1 day ago - 4 weeks 1 day ago #846510 by SW18
SW18 on topic Media Release: GallopTV
Hi Sylvester
Sorry to hear we may have lost you as a regular viewer on Racing 240, we would like to correct that.
We are monitoring all television products out there, both locally and abroad in an effort to ensure the channel meets the product criteria and needs of all stakeholders, as far as possible. There is no doubt our tech upgrade and migration got off to a less than ideal start. We are however confident that working with our key stakeholders (AWS, Viz, MultiChoice, BCX, Liquid Telkom & Telemedia etc) that we have pushed through the bulk of the various System Integrations and aged/incompatible infrastructure challenges.
I would like to invite you in person to visit us in JHB (if you are based here) or via an MS Teams/Zoom call to meet with the team members responsible for the channel to get your feedback, criticism and suggestions on how we can improve further.
We recently held our first stakeholder content / channel committee meeting which proved to be most beneficial - ABC is represented on this committee.
Please feel free to email me directly at This email address is being protected from spambots. You need JavaScript enabled to view it. or PM me your contacts and I will give you a ring?
I extend this invitation to anyone else who would like to engage too - please email me and we will arrange accordingly.
Hope to hear from you soon. Thanks Stephen
Last edit: 4 weeks 1 day ago by Dave Scott.
The following user(s) said Thank You: Sylvester

Less More
4 weeks 1 day ago - 4 weeks 1 day ago #846545 by Muhtiman
Muhtiman on topic Media Release: GallopTV
.....so it would appear that the problems that I have lost my sh!t over are purely of a technical nature as it is not CHANNEL 240 that is received on the Crenova decoder but the GR1 feed ....not that I would want any of the magazine programming bumf to be there anyway....as I only want to be able to watch actual live racing with the correct sound track/commentary with no picture freezing and not or no sound....and if possible watch horses go down to the start and load without the exotic betting slides up over the pictures....so a clean feed if at all possible....we are mostly all watching from the comfort of our homes with a device at hand displaying the betting, racecard or anything else at hand and need not have this info blocking the screen especially when one is trying to view the horses.....do know that this/these feeds are beamed to betting facilities and bookmakers.....so if one is punting from there one can easy see the odds on the bookie boards or if in a tote facility(if any still exist) there are monitors displaying tote odds and exotic will pays....so why put this info over the pictures' coming directly from the racing venue....

My idea of "help from above" is a sniper on the roof
and a higher power is a hell fire missile armed drone.
Last edit: 4 weeks 1 day ago by Muhtiman. Reason: Post script 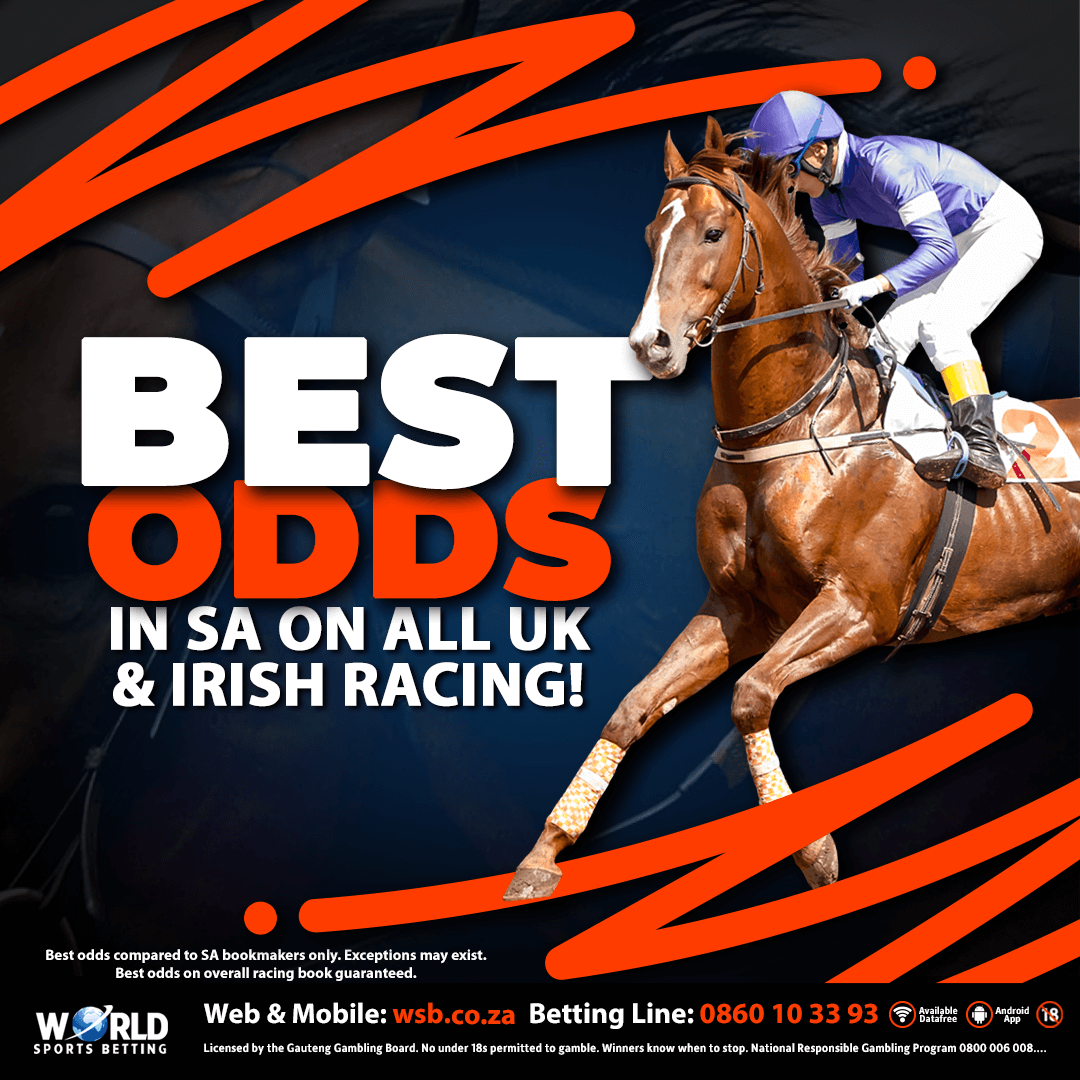