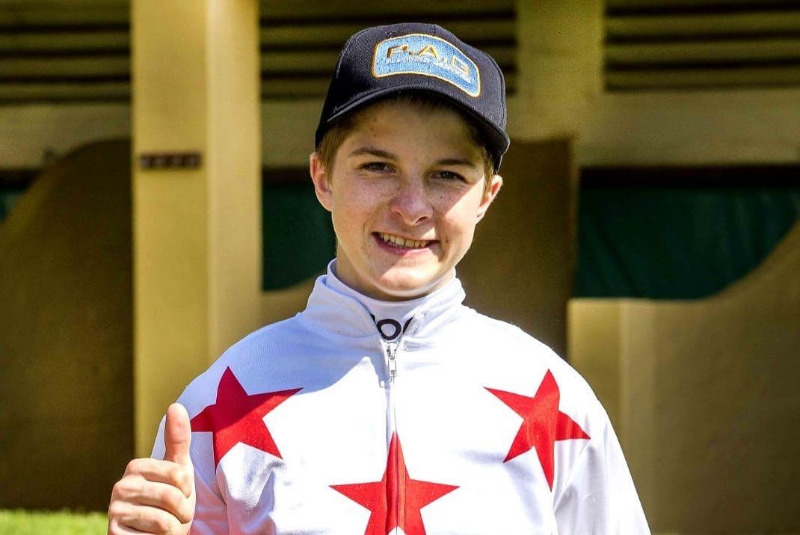 I Donald Geerthsen am currently in my third year and finishing my Matric at the South African Jockey Academy.
I have been race riding for almost 11 months and had 13 winners to date.

My family does not have close relations to horse racing and horses in general, the closest family relations that we have to horses would be my late Grand Father who was brought up on a farm and very involved with horses although we very seldom heard about those stories growing up.

For some reason the idea of horses intrigued me and I eventually convinced my mom to let me start show jumping at the age of 7 and from there I ended up riding at Cornerstone Equestrian Centre with Anthon Hoek becoming my coach.

I went to Pretoria Boys High and in grade 9 my riding Coach Anthon who was before assistant trainer suggested that I try and become a Jockey and helped me get in touch with the Jockey Academy and I was then fortunate enough to get accepted to the Academy thus bringing me where I am today.

I was lucky to have broken the ice early and rode my first winner at only my fourth ride on a filly by the name of TWICEASFAST trained by Mr Humby. She has to be one my favourite horses as our partnership has lead to three winners and I feel that we have grown together and that is due to Mr Humby’s continues support and guidance as he always helps my by letting me know where to improve on as well as giving quality rides.


I ride as much work as possible and try to get around to as many trainers as possible in the mornings. I have recently been going to ride work Mr Miller which has been a very beneficial decision as I have thus far had 2 winners from 4 rides.

I would also like to thank Mr Lafferty, Mr Howells, Mr Bosch, Mr Puller, Mr Roberts, Mrs Wright and the training partnership of Mr Badenhorst and Mrs Kennedy who have all supported me which is greatly appreciated.

During the previous December Holidays I traveled to both P.E and JHB and had a winner for Mr Botes which allowed me to gain valuable experience at riding at different centres. Shortly after I was contacted by Mr S Poriazis who asked me if his company P.A.G Cleaning Services could sponsor me of which I gladly accepted.

I would like to thank Mr S Poriazis for the support as I feel that it was a great confidence booster knowing that there are people supporting me. I am extremely grateful that I can represent P.A.G Cleaning Services with pride

Less More
2 months 3 days ago #841238 by Craig Eudey
Craig Eudey on topic PAG cleaning Services introduce Donald Geerthsen
Riding a lot for us. Very nice respectful guy who rides to instructions. All you ask for at this stage of his career. He will do well.

The world is truly your oyster!

Less More
2 months 3 days ago #841244 by TNaicker
TNaicker on topic PAG cleaning Services introduce Donald Geerthsen
Wishing him well and a long and healthy career...
Life's too short to have a long face...so, cherish the good, learn from the bad and forget the rest...

Cheers to you Stergio for your sponsorship to Donald 👍
The following user(s) said Thank You: Sylvester

Cheers to you Stergio for your sponsorship to Donald 👍