Factor Fifty can block out opposition 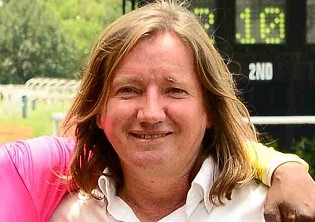 
One of the most competitive events comes up in Race 8 where eight fillies and mares go to post in a FM 82 Handicap over 2000m and one can make a winning case for all of them.
Interestingly Brett Webber saddles three runners and David Nieuwenhuizen two, and their inmates could fight this one out.
Often when studying form, one is confronted by a number of form lines that could lead one in different directions. What one needs to interpret is which is the strongest. The one that stands out in this race is a Pinnacle Stakes at Greyville won by Fresnaye. Joey Ramsden’s charge is extremely talented and is rarely far off the best fillies including the likes of Oh Susanna and Lady In Black.
Both the Nieuwenhuizen-trained fillies raced in that Pinnacle Stakes over 1600m and although they finished fifth and sixth, it was not a shocker of a run. Spring Poetry was 5.20 lengths back and Factor Fifty 6.95 lengths behind.
It is interesting to note that blinkers were fitted to Factor Fifty, probably to try and get her to race a lot more handily but clearly the distance was far too sharp for this daughter of Marchfield and they failed to assist her in any way.
Her next run was over 2400m and on this occasion she ran on powerfully to get the better of Top Shot by 0.50 lengths. That was only her fifth run and she clearly has room for improvement, especially if one considers she won her maiden race over 1700m by 13 lengths.
She does come back in distance but this 2000m on a track with a long run-in should be ideal. Nieuwenhuizen has given the ride to recently crowned champion apprentice Luke Ferraris.
S’manga Khumalo will take the ride on Spring Poetry who has run consistently in stronger company and has a record of two wins and three places in eight runs over this distance.
Western Dance was all the rage last time but she disappointed, finishing fifth, 3.65 lengths behind Factor Fifty. Webber’s charge is 4.5kg better off and should once again go very close.
Apprentice Kabelo Matsunyane has started the season well and is a rider to watch this season. He takes the ride for the second time after finishing a 0.10-length second behind Emily Hobhouse two runs back.
Cold Cash ran a good race against the colts last time when a 1.25-length fourth behind American Indian over 2000m on the Turffontein Inside track but she has not won since December last year. Gary Alexander is fitting her in blinkers for the first time and that could help her chances.

Tweet
Published in Latest News
More in this category: « Star line up for Champions Cup The Gauteng Summer Cup »
Login to post comments
back to top