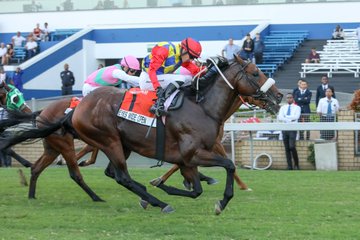 Eyes Wide Open made a timely return to best before the coming Vodacom July when scoring a gutsy win in a incident filled WSB Greyville 1900 on Saturday.

Supported Orpheus had scored a runaway win in the Listed Sledgehammer here last time, and was expected to assume front running duties again.

But he missed the break this time, and then compounded matters by interfering with a few other runners on the turn, and then racing very wide before finally getting to the front.

Not surprisingly his effort fizzled out quickly in the straight, and he finished with only one behind him.

Then Muzi Yeni was unseated from Fiorella at roughly the 900m mark after the filly appeared to stumble. The current Jockeys championship leader fell heavily, and was taken to hospital for x-rays.

Kampala Campari took it up as they turned for home, but  was soon swallowed up as Justin Snaith trio Doublemint, Made To Conquer and Magnificent Seven all moved into contention.

But Eyes Wide Open managed to find galloping room late, and Glen Kotzen’s charge found extra to score by a neck in a blanket finish where a mere length and a quarter covered the first ten past the post.

Magnificent Seven, Made To Conquer and Fresnaye filled the minor places.