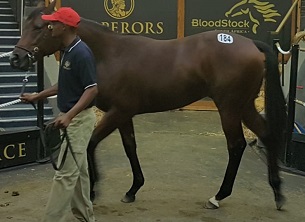 Master trainer Mike de Kock successfully bid a recording-breaking R9 million on behalf of Shadwell South Africa for a Silvano colt on Day 1 of the National Yearling Sale in Germiston.

The colt, called Masaki, is out of the mare Quickwood and was bred by the Wilgerbosdrift Stud of Mary Slack.

The R9 million is easily the highest price paid for a thoroughbred racehorse at auction in South Africa and came as something of a surprise with the second last lot of the day.

Shadwell is the racing operation of Sheikh Hamdan al Maktoum of Dubai, the De Kock stable’s most prominent owner and a long-time supporter of South Africa’s breeding and racing industries.

The underbidder was expat South African trainer Tony Millard, shopping for clients in Hong Kong, where he has been based for decades.

A hush fell over the Thoroughbred Breeders Association auction amphitheatre as Millard and De Kock battled it out, with auctioneer Graeme Hawkins calling the escalating bids by the half-millions. Hawkins gave Millard plenty of ime to up his final offer, but finally brought down his gavel to set off loud applause.

De Kock was also the bidder for the day’s second most expensive lot, which went for R4.4 million. This was the Captain Al colt Vasco Da Gama, also bought on behalf of Shadwell. The strapping bay is a full brother to well-performed Captain Splendid and was bred by Varsfontein Stud.

The third highest price on the first day of South Africa’s premier sale was R4.3 million, paid by the Form Bloodstock agency for filly Kim Soo, consigned by Drakenstein Stud and by the recently deceased champion stallion Dynasty.

A half-brother to star filly Blossom was sold for R4.2 million. The colt from Mauritzfontein Stud – named Ficksburg and by Querari out of Triple Tiara champion Cherry On The Top – was signed for by the Hong Kong Jockey Club.

That sale came hot on the heels of a R2.2 million sale of a full brother of former Horse of the Year Legislate. Bred by Cheveley Stud, that unnamed colt is by Dynasty and is out of the mare Champers. He was released by prominent owner Nic Jonsson.

After a slow start and a morning of solid, if unspectacular, bidding, the action picked up in earnest after lunch and the rash of multi-million lots whipped up excitement at the Thoroughbred Breeders Association sales centre.

Another highlight was the R2 million paid by Bjorn Nielsen for a Silvano filly consigned by Klawervlei. The same breeder pocketed R1.6 million for a Captain Al colt, the cheque being signed by the

Jonsson was also the successful bidder for an unnamed daughter of Dynasty out of the brilliant race-mare All Is Secret. She fetched R900,000 for Klawervlei.

Tweet
Published in Latest News
More in this category: « Back Smith And Yeni at Fairview Feast of racing at Fairview »
Login to post comments
back to top