Less More
6 months 3 weeks ago #774836 by Bob Brogan
Latest Summer Cup Log was created by Bob Brogan
As expected after his fluent Charity Mile victory last Saturday, Barahin is now at the top of the log for the R2-million Gauteng Chris Gerber Summer Cup (Grade 1), proudly brought to you by Bidvest, over 2000m at Turffontein on Saturday 30 November, alongside stable companion Soqrat.

Barahin is now quoted as the 2-1 favourite for the Summer Cup with Zillzaal next best at 7-1 with Cascapedia and Roy’s Had Enough at 8-1.

Four horses were supplemented into the race and they are Bize and Flying Winger from the Alec Laird yard, St John Gray’s Dawn Assault and perhaps the most interesting of all, Yellowwood Handicap winner Queen Supreme from the Mike de Kock yard.

Earlier, De Kock withdrew Hawwaam, Buffalo Bill Cody and Like A Panther while also pulled out were Doosra and Come The Day.

Barahin and Soqrat were handed top weight of 60kg and they will have to concede 5.5kg to the third highest weighted runner who is Infamous Fox at 54.5kg. Queen Supreme has been allotted 48.5kg and has come on to the log in 12th position with Dawn assault at No 13.

Another horse to make a move is former Cape Derby winner Atyaab, who comes on in position No 9 following Saturday’s win in the Listed Java Handicap.

Soqrat will be running in the Grade 3 Victory Moon Handicap at the Vaal on Saturday after which De Kock will decided whether he will run in the Summer Cup.

Final Entries close at 11am on Monday 18 November, Declarations by 11am on Tuesday 19 November after which the final field will be announced. The draws will be made at a function on Wednesday 20 November 2019. 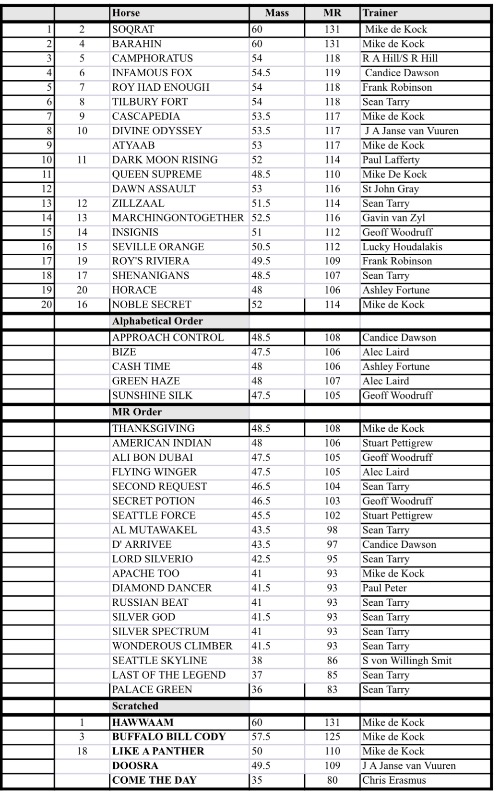 Less More
6 months 3 weeks ago #774840 by Dave Scott
Dave Scott on topic Latest Summer Cup Log
Had a look at "ante" post betting and a few punters will be "anti" about having an early punt after the scratchings over the last couple of weeks.

Less More
6 months 2 weeks ago #774844 by Frodo
Frodo on topic Latest Summer Cup Log
Could be a lot of movement on the log after the Victory Moon on Saturday - horses like Shenanigans, Green Haze (currently priced at 45/1), Seville Orange (55/1) and especially Al Mutawakel (at 18/1 - same price as Soqrat

) need big runs to cement their places. Of those I think Green Haze may have the best chance of featuring and if so could be value at those odds

......recent bumping up the MR's has made the field look much stronger but still the quality is not as deep as it looks....

Socrat lotsa weight to carry around. The light weights must come in with a shout. i would set a fast pace to make sure Socrat works for the win.

would not be taking a short price on Socrat

......recent bumping up the MR's has made the field look much stronger but still the quality is not as deep as it looks....

If one accepts that Barahin ran to around 130, then Flying Winger did run to 105 ..... but imo quite a few did not run to their ratings (most noticeable Infamous Fox) - whether this was a result of the going or some other problem, we'll never know

Less More
6 months 2 weeks ago #774855 by Karma
Karma on topic Latest Summer Cup Log
Obviously alot has been said re the MR rating etc, but i really battle to take Baharin rated at 131 seriously.... It is an insult to our previous champs....
Are you living your life or waiting to die?