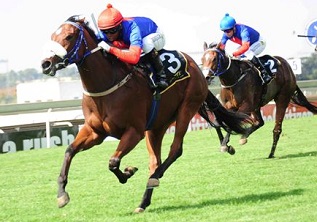 Jack Milner: Aurelia Cotta takes a drop in class and that could help her get back in a winning frame of mind when she runs in Race 7 at the Vaal on Tuesday over 1600m on the Classic course.

Two runs back Sean Tarry’s charge took on the colts in the Non-Black Type Grand Heritage over 1475m on the Vaal straight course.

After that she travelled to KwaZulu-Natal to run in the Grade 3 Flamboyant Stakes over 1600m at Greyville. In both cases she finished down the field, but neither was an embarrassingly bad effort.

In the Grand Heritage she was beaten 7.60 lengths by Riverstown to whom she gave 2.5kg. In the Flamboyant Stakes she went down 5.20 lengths to Roy’s Riviera, but she was never able to get into the race. It could have been the yielding going that affected her, but it was not her true form.

She is reunited with jockey Raymond Danielson for this race and he has a good record on the daughter of Ashaawes. He was aboard when she won her two starts prior to the Grand Heritage and also rode her when she finished a four-length fourth behind Queen Supreme in a Graduation Plate, giving Mike de Kock’s Grade 1 winner 2.5kg.
They jump from No 5 draw on a course where barrier positions are important.

The main threat is likely to come from Virginia from the Alec Laird stable. She returned from a three-month layoff to win a MR 104 Handicap over 1600m against the colts, beating useful Captain Of Tortuga by 0.40 lengths.

She won her maiden on this course over this distance and has the advantage of jumping from No 1 draw. S’manga Khumalo rode her to victory last time and he has been engaged once again to ride this four-year-old daughter of Philanthropist.

Secret Dream is an improving three-year-old from the Lucky Houdalakis yard and if the top two fail, she looks likely to pick up the pieces. She has only raced six times for a win and three places and her last run, in which she finished unplaced behind Machali, is best ignored as she choked up in running.

She carries just 54.5kg and will be ridden by Marco van Rensburg. They will jump from No 6 draw.

Tweet
Published in Latest News
More in this category: « One World wins the Sun Met Summer Pudding looking bright »
Login to post comments
back to top