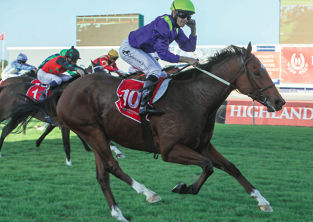 Undefeated Rainbow Bridge takes his next step towards potential stardom this Saturday when he lines up in the Grade 3 WSB Matchem over 1400m at Durbanville.

Eric Sands’ gelding is already a dual winner at this level, after taking the first two legs of the Cape Winter Series (Guineas and Classic) in impressive fashion, solidly beating classy sorts like Rocket Countdown and Doublemint on both occasions.

He hasn’t appeared since the end of May, but as the highly experienced Sands explained on Monday, that was a strategic decision on the part of his connections.

“Mr Gerber and I decided to give him time off after the Classic, and he just trotted, walked and was in the paddock for two months.

“He has been back in full work since the end of July, and is doing very well. This is a pipe opener towards bigger things, and he isn’t fully wound up.

“We gave him a gallop at Durbanville, and while I don’t think this is his real course, and 1400 isn’t his real trip, he certainly has the class to overcome these negatives.”

The Milnerton based trainer indicated that nothing is fixed for his summer campaign, but races like the Green Point Stakes and L’Ormarins Queens Plate would certainly be on his radar.

Sands also revealed that Bernard Fayd’Herbe has been engaged to ride the stable star in the big races to come.

When contacted, the multiple Grade 1 winning jockey was fulsome in his praise.

“He gives me the feel of a real top class horse, and this is the type you don’t mind getting up at 5am to ride.

“I’d like to thank Eric and owner Chris Gerber for giving me this opportunity, and I am really looking forward to Saturday” he concluded.

Tweet
Published in Latest News
More in this category: « American Landing to strike at Greyville Jailhouse Rock has the moves »
Login to post comments
back to top