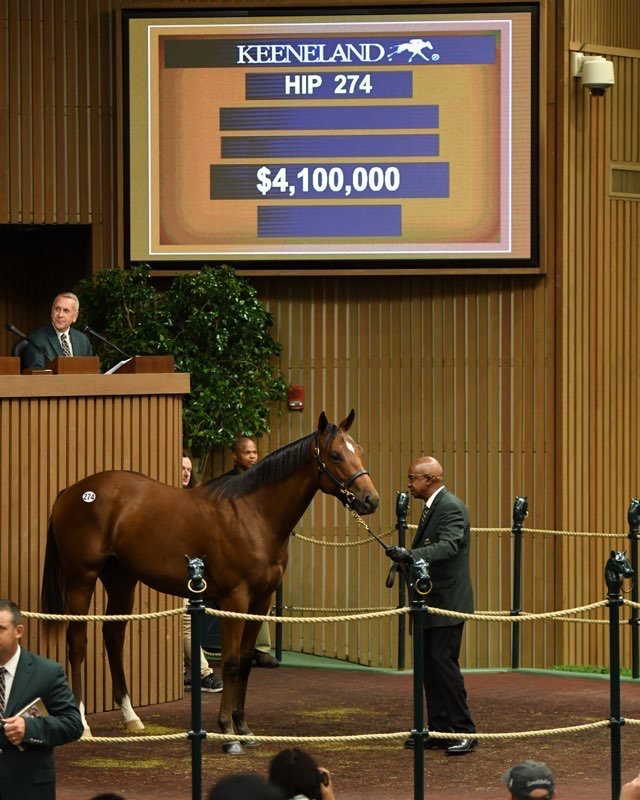 In a flashback to the heady days before the full impact of the global economic crash, Sheikh Mohammed continued to dominate the Keeneland September sale with a trio of seven-figure purchases in the early action on Tuesday, including a $4.1 million Curlin colt who became the new sale-topper.

That price was the highest at this venue since 2010, when an AP Indy colt sold for $4.2m to Besilu Stable, and Godolphin agent Anthony Stroud said he was left “gasping for air” as the Coolmore team pressed Sheikh Mohammed for the colt bred by Barbara Banke’s Stonestreet Farms.

But the ruler of Dubai would not be denied, and he urged Stroud to continue until the colt, the first foal out of New Zealand champion sprinter Bounding, by Lonhro, was secured.

Stroud said: “He’s a very athletic horse, a lovely well balanced horse from a good farm and we liked him very much. He just had wonderful movement and athleticism.

“I needed oxygen. We were gasping for air at that stage,” he added of the bidding. “Luckily we're under the leadership of Sheikh Mohammed and he's a decisive man and completely in control. He’s the one who makes these decisions and in this particular case he told me to continue.”

Sheikh Mohammed had previously hit a short-lived new high price mark for the sale earlier in the session when capturing a $2.9m War Front colt out of Kentucky Oaks winner Believe You Can.

“Sheikh Mohammed really liked this horse," said Stroud, noting the price was higher than anticipated. "It was a great deal of money but he liked him. He’s by a great stallion in War Front and out of a Group 1 mare. He had the conformation to suit and we thought he was a really good horse, Hopefully it will prove well worth it."

The colt’s dam, by Proud Citizen, earned more than $1.2m while racing for the colt’s breeder, Brereton Jones of Airdrie Stud. Believe You Can has already produced a stakes winner, Believe In Royalty, who also is graded stakes-placed.

Whether the colt will race in Europe or America will be decided by Sheikh Mohammed when the Godolphin team has finished buying this week at Keeneland, Stroud said.

Soon after Tuesday’s session began Sheikh Mohammed bought a $1m Union Rags filly who will be aimed at American racing.

“Sheikh Mohammed wants to buy some fillies to race in America," said Stroud. "She fits the bill, she’s well bred, very athletic and a nice filly."

The bay filly, a May 4 foal bred by Siena Farm and consigned by Taylor Made Sales Agency, is a half-sister to Grade 2 winner Point Of Honor, who has distinguished herself at the of the American three-year-old filly ranks this year by finishing second in a pair of prestigious Grade 1s, the Alabama Stakes and Coaching Club America Oaks.

A trainer for the filly is “still to be decided by His Highness,” Stroud said, adding: “We’ll see how the week pans out. He’ll make a decision in due course.

“She is a good, easy mover. In general, she ticked the boxes.”

Sheikh Hamdan also continued with robust bidding for his Shadwell Estate Co, lassoing a Union Rags colt soon after his brother bought the filly by the same sire. Shadwell paid $750,000 for Hip 202, a bay son of the Bernardini mare Zondaq who is from the female family of European champion Duke Of Marmalade and top broodmare Weekend Surprise, dam of AP Indy.

Toward the midway point of the session, another leading buyer, Larry Best of OXO Equine, paid $900,000 for a Flatter colt who is a half-brother to multiple Grade 1 winning turf performer Beach Patrol.

Less More
1 year 1 week ago #770643 by naresh
naresh on topic Sheik Mo splashing the Bucks
He bought a stunning grey also for $2.5 million. 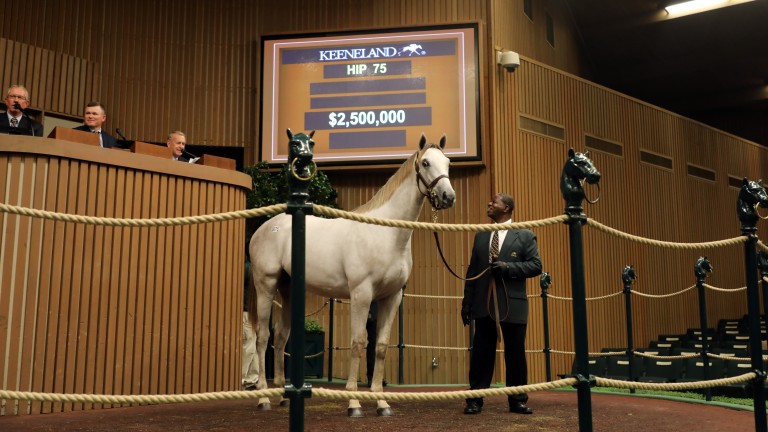 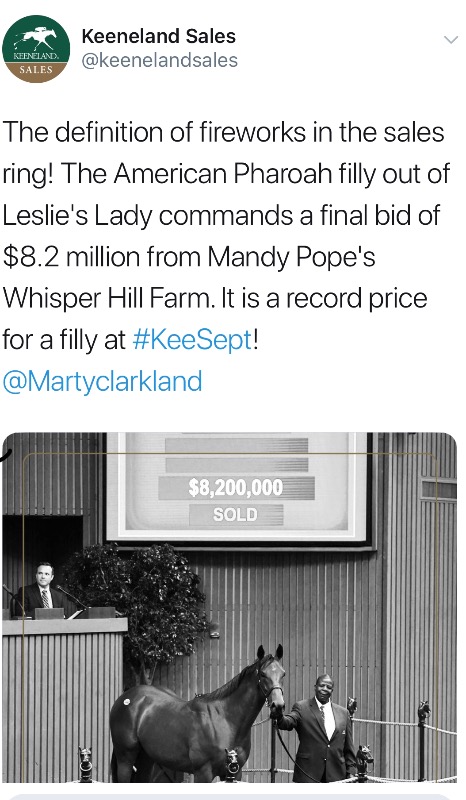 Less More
1 year 1 week ago #770673 by Dave Scott
Dave Scott on topic Sheik Mo splashing the Bucks
Thats about R120 Million for a horse and i thought racing was under pressure.

Less More
1 year 1 week ago #770691 by naresh
naresh on topic Sheik Mo splashing the Bucks
The dam Leslie's Lady is a blue hen and has produced, Beholder, Into Mischief and Mendelssohn.

Less More
1 year 1 week ago #770696 by jim
jim on topic Sheik Mo splashing the Bucks
must be the popes daughter. or have a hotline to him.